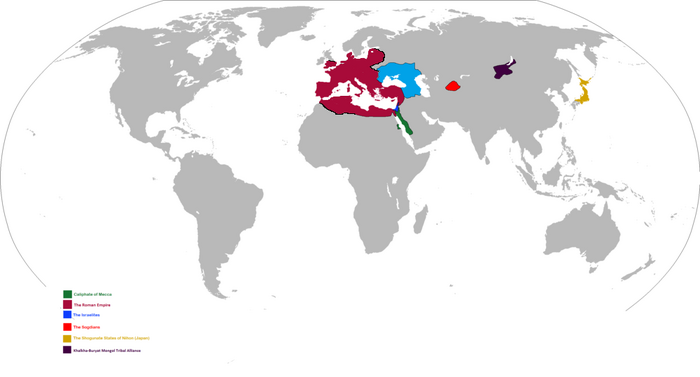 Each nation has one turn per day, and each turn represents one year. In each turn make include thing that are happening in your civilization, discoveries, news story and recent events, and military, economic, and infrastructure improvements etc. Also you may declare war or conduct other diplomatic actions in your turns. For the few turns, you may not declare war to give you guy time to build up your civilization. There can be a period of "renaissance or golden age" for your civilization, a period of despair, new religious movements, or civil wars and rebellion. If you expansion, you can take over a whole continent, expansion may take a few turns, but a little at a time. The map will be update every turn. Make every turn realistic. The game will start when there are at least 5 players.

Civil wars should happen; especially if you are controlling a large, multi-ethnic empire or a succession crisis is happening if your nation is a monarchy. If a new nation does gain independence from a civil war or referendum, it will be an NPC nation until someone calls it as their own. (Everyone only control one nation, please). If any one has a war algorithm they would think if efficient please let me know.

Each country starts out with Iron Age technology but can be improved over the turns or can hear of it from nearby nations with higher technology.

Moderators are the players who control the game, essentially; to become a moderator a player must show that they would make a good moderator, not being aggressive, being a calm player, must be relatively active. Mods will be chosen by me. If you would like to become one, please ask.

I have created a template for you to use to give a brief description of your civilization. To join, just fill out the requirements in the template with the border outline of your civilization on the world map I made in the Talk page then I will edit the official map to put your nation on it. If doing a union with another person civilization, please get permission from the owner. The area of the nations has to start out small, if deemed to large, I will cut the size down a bit.

Okay the game is now starting, It is now Spring time.

Polynesian Inca: as we subdue the local tribes in the area, we begin to make more pottery and grow a navy, and suddenly Kamehameha the 3rd announces that a potter under his domain has discovered a new material. It is stronger than bronze and lighter than tin. Mass production of it will start soon.

Polynesian Inca : As we gradually expand the domain of pachacuti and hamahameha, more of the land belongs to us... soon chlilaba (clapaz) is conquered and established as the trade hub of the empire. Also, we begin sailing across the sea, as our northern expansion has been stopped by the Mayans. Easter island is conquered, as well as a lot of other tiny islands, and tales of metal clad warriors called "Japanese" begin to be told from the conquered islanders. Plans begin to form of vassalizing the other Latin Americans (i know they won't be called that in this game, im just stating a region...) instead of conquering them... (If this is OK, since the rules state it, ( will be posting my turn every day and will probably take over the world without any opposition...) be more active!

Retrieved from "https://mapgame.fandom.com/wiki/Alternate_Civilizations_(Map_Game)?oldid=75471"
Community content is available under CC-BY-SA unless otherwise noted.