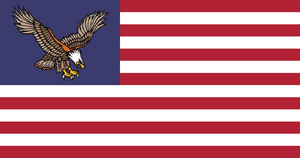 The American Union State is a country in the south of the former United States. The AUS was formed by a combination of the America First Party, more liberal parts of the Ku Klux Klan, the Silver Legion, and the Military Junta formed by General Douglas MacArthur. The AUS effectually formed after the formation of the American Soviet Republic. It was recognized by the URC, Canada, Britain, and New England by the end of the civil war in 1944.

Retrieved from "https://mapgame.fandom.com/wiki/American_Union_State_(America_Reborn)?oldid=71874"
Community content is available under CC-BY-SA unless otherwise noted.