THIS GAME WILL RESTART WHEN THE GLOBAL WAR REBOOT HAS FINISHED AND THE 2015 MAP GAME HAS TOO.

The year is 1870, the USA has fallen, only leaving 8 states for its second Republic, welcome to the world of Anarchist America.

The next two years would become a revolution in America, all but 8 states broke away from the union and the 8 states created the 'Second Republic'. In the Conference States slaves began rebelling and Texas, Mexico (being under the Conference States in this ATL), United Southern States of America and the Republic of Florida declared independence.

Now you must decide the future of America.

Differences from the OTL[]

1. Be plausible, nobody conquers America in one turn.

2. One nation per person.

4. The new turn is turned on at 8pm British Summer time.

6. Respect the judgment of the mods.

7. If anyone has been inactive for 4 turns without alerting the mods, they are removed. They may rejoin when they are active again, but only if there's a spot.

8. Any country that has not been filled will be operated by the mods.

9. To sign up for a BOLD country, you must be approved by the mods.

10. Mod decision final. You may apply to reverse the mod decision.

12. You can only edit the map if your the mapmaker (wild) or you've contacted a mod and the mod approved you.

14. The template map will be replaced and put into the archives as soon as the game turns worldwide

3. You can play but don't abuse your power in the game.

5. A mod may be kicked if the majority of the mods approve to be kicked. In an event of a tie AH28 descsion is final.

If you want to ban somebody it will all take place on this page: Wall of Shame (Anarchist America) 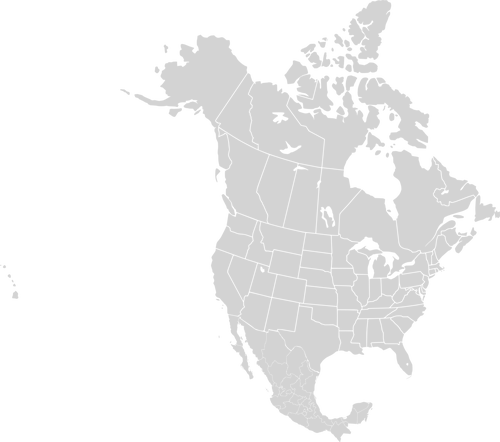 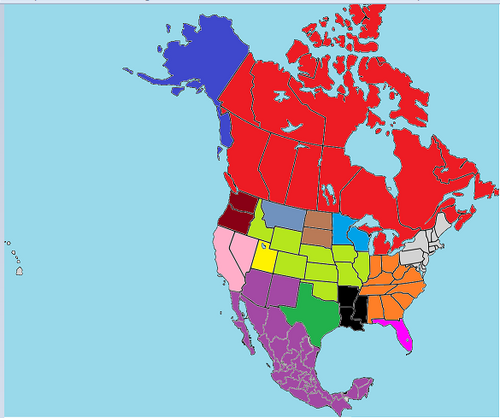 This the starting map for the game. Use the template above to update the maps and put old ones in the Maps page for archives. Do not remove any maps from this section! ~Mapmaker Rikka

When you publish a new map the mapmaker will always publish it on this page: Maps

Any issues you have with the map place here.

Republic of California: (California, Nevada): Your Admirer and Mapmaker, Rikka~

Republic of Florida:Will Grigg's on fire

THATLL DO FOR NOW.

People are still in shock about the Great American Fall.

Utah is about to fall.

Tensions begin to rise between Conference States and the U.S.. They both try and find allies.

British Canada: We are still in shock about the Great American Falling. We offer Greater Kansas an alliance to defeat the Northern countries, promising them half of the land. We also offer an alliance to California and French North Africa. We would call that alliance the Quadruple North American Alliance. British Canada invades the USA and Dakota. We improve are army, ready for conquests ahead. More British men arrive from all over the empire to fight here.

Kingdom of Hawaii: With the collapse of the United States of America, Hawaii recognizes the Washington Kingdom and the Republic of California. The Kingdom of Hawaii claims all American islands in the Pacific, most from the Guano Islands Claim. The army is modernized; we ask Washington Kingdom for 3,000 guns and 50 ships in return for Kure Island and the Gardner Pinnacles.

USA: Mobilizes troops and sends them into British Canada, northern New England for defense, and Ohio with the intent of recapture, Pleads for alliance with Dakota, Montana, Florida, Mexico, and Texas with the rationale of putting aside differences and restoring order to the nation.

Minnesota: Requests an alliance with Greater Kansas in order to protect them selves from the threat of British Canada, and requests a trade agreement with Mississippi and Greater Kansas.

Republic of Florida: We recruit 1,000 troops in Florida. Florida fears that British Canada is attacking the Dakota, which puts us the threat even more if they come closer to us. We're building fortifications for a defense of military and capital city. Although, with Utah to be fallen, that also puts us in a fear as well, with people in shock of American Fall. The army and infrastructure are expanding, we build ports in the coast of Florida.

GAME NEWS: I thought this map game was dead after only 3 people posted on the first turn, but hopefully now we can continue this game.

No surprise, without any aid, Utah falls into anarchism and independant, Mexican, Greater Kansas, Utah and Californian movements all start in Utah in the Utah Civil War.

Tensions between the Conference States and US has seen to die down as most Americans are worried about the new old common enemy: France, Holland and Britain.

The Dutch begin an invasion of Florida to establish Dutch North America.

Most of Dakota falls to the British while the US seem to stand well against the British.

British Canada: We offer Greater Kansas an alliance to defeat the Northern countries, promising them half of the land. We also offer an alliance to California and French North Africa. British Canada continues invades the USA and Dakota. We improve are army, ready for conquests ahead. More British men arrive from all over the empire to fight here. We build our military. We continue to withstand against the USA, planning for a major attack next turn. We are set to defeat Dakota by the end of the year. We also aid the Dutchs conquests of Florida and asks for an alliance.

Republic of Florida: We fear that Dutch begins an invasion, but unfortunately we surrender as they are too strong as we believe.

Greater Kansas: Plans to invade Montana continue to be made. Meanwhile infrastructure is improved.

Community content is available under CC-BY-SA unless otherwise noted.