Welcome to Boshido! In this map game, you choose the name of your Samurai clan and domain and fight for control of Japan. 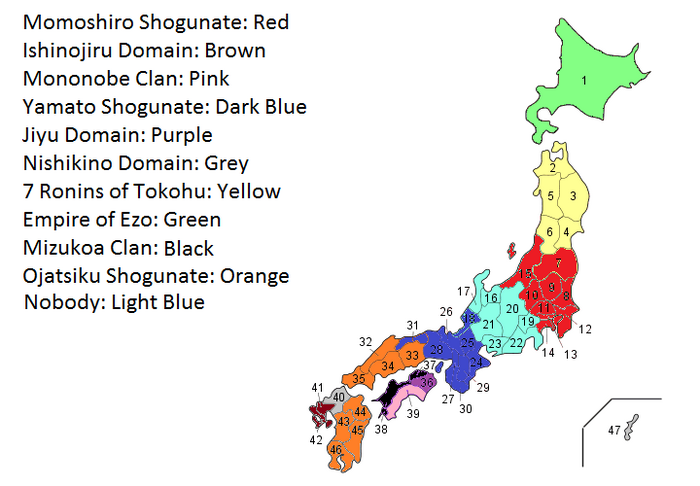 Welcome to Boshido! It is the year 900 in Japan, the Samurai have taken control of Japan, splitting it into numerous territories. Ezo, or Hokkaido has been claimed an Empire by the Ainus living their. The Ryukyuan people of Okinawa are still under the control of the Samurai. Ronins control the territories to the north. Will your government survive this hectic period? Let's find out.

Momoshiro Shogunate: We fortify our border with the 7 Ronins by building up towers and setting archers up everywhere. Life is fairly normal within our walls and trade with the neutrals to the south are going well. The Shogun, Momoshiro Kayato officially converts to Buddhism but still retains Shinto as a secondary religion.

Mononobe Clan: The leader of the Mononobe clan, Mononobe no Muchimaro, along with a majority of the clan, adopts Taoism to be their religion alongside Shinto. A policy of neutrality is adopted for the time being though the military is build up for defensive purposes. Meanwhile, a new town in OTL Kōchi City, called Shōtoku, begins construction and is to be the new capital for the clan once finished.

Chīsana Clan: We offer to trade with the Momoshiro and Yamato Shogunates next to us, and we begin to recruit a standing military of about 2,000 men.

Ishinojiru Domain: We declare war on the Nishikino Domain, raiding the border. We raise an army of about 10,000. We build are military greatly. We would like to improve trade with the Ojatsiki Shogunate.

Ojatsiku Shogunate: Atakomu Ojatsaku is the Shogun of our region. Our capital is Hiroshima, and we build fortifications around it. We declare war on the Nishikino Domain, and send about 5,500 men and a few ships to help defeat the domain, invading from both the South and the East. We offer an alliance to the Ishinojiru, and increase trade with them. We ask to increase trade with Korea (Mod Response).

Mizukoa Clan:Hiroshi Mizukoa, the shogun of our clan, is in a good mood lately. So, we wished to establish an alliance with the Jiyu Domain, sending 1 ton of our clan's prized fishes and prawns as a present. We also wished to form an alliance and a trade route with the Momoshiro Shogunate, in hopes of knitting a better relationship between us and them :)

Empire of Ezo: We request an alliance with the Seven Ronins, wanting to weaken the nearest Japanese Shogunate to us. We begin to improve our economy, trading more with non-Japanese nations. An invasion of Korea is prepared(we have a large empire off the map). We begin building a larger navy to aid us in amphibious invasions. We begin research into gunpowder from China.

7 Ronins of Touhou: We feel threatened by the aggressive Ezo Empire and thus the 7 Ronins meet at the summit of Touhou and agree to temporarily unify against the Ezo Empire and we agreed to increase trade among ourselves. While the 7 Ronin were meeting, the minor Ronins banded together and attacked the 7 Ronin in Touhou. The 7 Ronin, however, managed to defend themselves successly in battle, and the minor Ronin were forced to retreat to the sea where they became mighty ship builders, however, and they were the envy of the 7 Ronin. Each Ronin wanted the shipbuilders, so they were divided. The Sea Ronin, however, were united against their enemies, which resulted in a successful defense of the Sea Ronin. It was agreed that the 7 Ronin and the Sea Ronin would forgive each other and the 7 Ronin would employ the Sea Ronin to build ships in order to increase sea defenses. The 7 Ronin also observed the construction of towers by the Momoshiro Shogunate, so the 7 Ronin adopted this and set up towers on the Ronin-Ezo border. As a result of the trade agreement, there is increased trade and a better economy among the 7 Ronin, and they give tools to help the populace make food better, and give weapons to their armies to make them fight better.

NUMBERS NEEDED FOR THE ALGOS!! A Samurai assassin kills one of the 7 Ronins and causes much uproar in the Kingdom. Momoshiro Kayato is killed by Samurai assassins during his visit to the Neutral Lands; his daughter of 25, Momoshiro Fumiko takes over the Shogunate and establishes a trade agreement with Tang China.

Momoshiro Shogunate: Momoshiro Fumiko, our new Shogun renames our capital from Momoshi to Edo. The Momoshiro Army current stands at around 6300, and a wall has begun construction due to the instability of our northern neighbor.

Mononobe Clan: The clan continues to follow the policy of neutrality though the military is build up for defensive purposes. Shōtoku continues construction and is scheduled to be done by 903. Meanwhile, a few ship ports are established mainly for civilian use, and plans are made to explore the waters outside of Japan.

Yamato: We continue warily watching the ezo's actions. Assassins strike near the border, killing a few guards before running away. A few ports are set up, and ships built.

Mizukoa Clan: Hiroshi Mizukoa attended Momoshiro Kayato's funeral and bid farewell to his friend even when they've only become one for a year. The alliance and trade route between the clan and the shogunate however will remain unchanged, under the supervisions of both sides' shoguns. However, worried about the wars that continued to rage on in the north, and the assassins that took Momoshiro Kayato's life, we took defensive actions, and fortified our sea borders with the Ojatsiku Shogunate by building water walls, just in case.

We also started training about 500 men on the inland sea's terrain, to ready them in defending the coastal regions of our clan's land if an invasion from other clans, domains, or shogunates were to ever happen to us. Despite all the hardships that have been going on lately, life stays solemn and peaceful among the clan members and economy continues to grow without too many bumps. Grapes are growing beautifully this year, so It seems like we're going to have a lot of delicious wine ~

Ojatsiku Shogunate: Our leader dies early, and has no named successor. He has had three sons, but the one with his wife has since died in battle. Thus, we collapse into civil war, as three different factions arise. One faction is in favor of a democratic system of election by the soldiers. Another is in favor of the Shogun's nephew. The final is in favor of the Shogun's son. We end our ongoing war, and the soldiers return to join factions and fight. One soldier, by the name of Takijo Hideshaki, gains great fame in his fighting for the Democratic faction, and becomes the person they vote for to be the shogun of the land that they control. (Vatonica is going away for a while, so if someone wants to take over, please do).

Ishinojiyu Domain: We continue are invasion of Nishinoko Domain with the Ojatsiku shogonate. We continue to invade it with 3,000 brave soldiers. We honor are alliance with the Ojatskiku shogunate with sending aid to the old system to resolve there civil war.

Mononobe Clan: The clan continues to follow the policy of neutrality though the military is build up for defensive purposes. Shōtoku continues construction and is scheduled to be done by 903. Meanwhile, a few ship ports are established mainly for civilian use. Mononobe no Fuhito, along with a few other clan members, begin to set sail on their first exploration trip. Near the end of the year, they soon run into the upper right part of OTL Luzon.

Ishinojiyu Domain: We continue are invasion of Nishinoko Domain with the Ojatsiku shogonate. We continue to invade it with 3,000 brave soldiers. We honor are alliance with the Ojatskiku shogunate with sending aid to the old system to resolve there civil war. We try and fight of the YAMATO invasion.

Mizukoa Clan: We've heard of the wars going around lately near our clan. However, we decided to declare neutrality of the clan, as we despised fighting, and would avoid them as much as we could, at least under normal circumstances. However, in honor of our alliance with the Yamato Shogunate, we are willing to assist them from behind the scenes, and help them to take care of stuffs like extra reinforcements, supplies, foods, and other basic warring needs.

We are also getting concerned about the group of messenger we sent to the Jiyu Domain two years ago in hopes of setting up an alliance between the Mizukoa clan and the Jiyu Domain. We've not heard any news of them for two years now, and something's definitely off. The family of the messengers are deeply worried about them, because they've not received a letter nor any kind of information, regarding them even being alive at all.

So, under the will of the clan, and the order of our shogun, Hiroshi Mizuoka, we would allow at most 3 more years for the Jiyu Domain to give us any sort of reply. If the time expires, by the name of the Mizukoa Clan, we declare war on the Jiyu Domain.

Mononobe Clan: The clan continues to follow the policy of neutrality though the military is build up for defensive purposes. Infrastructure is improved. Shōtoku continues construction, and the scheduled completion date is moved to 905 as the town is not ready yet. Meanwhile, a few ship ports are established mainly for civilian use. After a few months on staying in OTL Luzon island, Mononobe no Fuhito and his crew begins to set sail, and goes to travel further south to find more places to explore.

Yamato: We overwhelm the enemy, conquering Jiyu and large amounts of Ojatsiku land. We send an expedition southwards, and land next to the Mononobe colony in Luzon.

Ishinojiyu Domain: We continue are invasion of Nishinoko Domain with the Ojatsiku shogonate. We continue to invade it with 3,000 brave soldiers. We honor are alliance with the Ojatskiku shogunate with sending aid to the old system to resolve there civil war. We try and fight of the YAMATO invasion.

Retrieved from "https://mapgame.fandom.com/wiki/Boshido_(Map_Game)?oldid=71202"
Community content is available under CC-BY-SA unless otherwise noted.