Welcome to Europa Gloria II! In this world, Europe still has many colonies around the world, all held by the empires of the 1880s. The Point of Divergence began during the Berlin Conference in 1885, attended by all of Europe's nations, in which they decided to split the entire world between them. They also sign a contract for 101 years of peace, meaning that all nations who signed the Berlin Conference Agreement are not allowed to declare war on each other. However, the Berlin Agreement did not go in effect until at the peace treaty of the Great European Expansive Wars, the war that was done to conquer the territories agreed upon in the Berlin Conference, accept for the 101 years of peace. When the peace treaty was signed in Warsaw, know as the Treaty of Warsaw, a golden age and economic prosperity came in for the Europe. The colonies provided great wealth to Europe and made the world 30 years ahead in technology since 1906; for example, while the year may be 1935, world technology is of 1965. During 101 years of peace, or some historians know as the 101 Great Years of Europe, boundaries change very little. However, the 101 years of peace is about to end, and fears of a great war breaking out is coming more of a reality.

These are people who are banned and those who have strikes. A ban lasts for a week and a banned player is removed from their nation. Gaining three strikes will result in a ban. Strikes are eliminated every week. 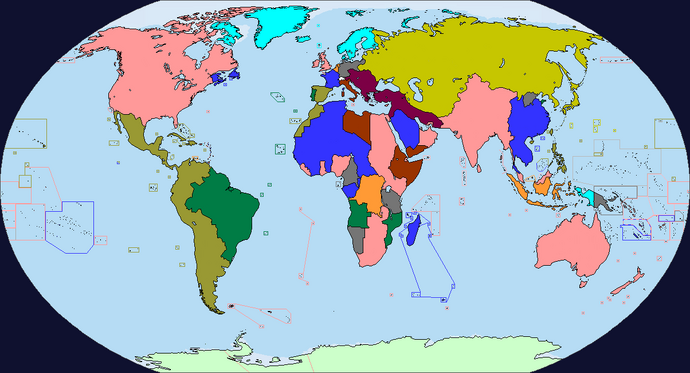 Here is the map.

Game will start when there are at least three players. The turns will be half years.

Retrieved from "https://mapgame.fandom.com/wiki/Europa_Gloria_II_(Map_Game)?oldid=80084"
Community content is available under CC-BY-SA unless otherwise noted.