Wilkommen children, tis is Kaiserreich, das map spiele. This is the year 1936. Germany won the first world war, now the world is paying for the consequences. The United States now having been hit with Black Monday as the Berlin Stock Market crashed (Seven years after the Wall Street one did) kept the Untied States wallowing under President Hoover. Japan meanwhile is on the rise and started to look west as Ungern-Sternberg's Mongolia, and Qing China. Russia, though weak, looks on to reconquer its old empire. The Ottomans and the Arab Powers are in a period of standoff, each waiting to make a move. In South America the German backed nation of La Plata continues its massive military buildup, preparing for another showdown with an increasingly Sydicalist (Communist) Brazil. Romania is under the Iron Guard Party, a Totalist (totalitarian) party determined to retake Romania's glory from Mitteleuropa. Austria now rules is empire like the British, through Dominions in its different regions. In India, the tripartite struggle between the Canadian-Commonwealth backed Delhi Raj, and the Internationale backed Bhratiya Comune. Spain also, is slowly creeping into civil war between the Carlist conservative bloc, and the Syndicalist workers. 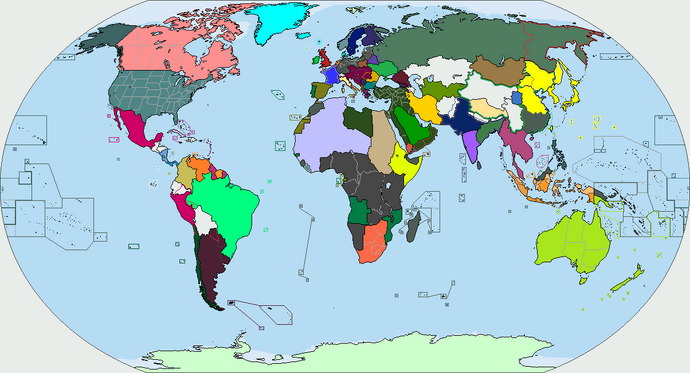 The Berlin Stock Market Crashes adding another layer to the Great Depression.

There are stirs in the leadership of the Union of Britain between Oswald Mosley, Niclas y Glais, Annie Kennedy, and Press Secretary Eric Blair.

Romania, France, and Britian continue military buildup, with France heavily investing in tanks, and Romania in the infrantry and Air Force.

Alexander Kerensky is assasinated in Russia sparkign political chaos in the young republic.

Don-Kuban Union rejoins Russia despite the violence in the streets.

George V, King-Emperor of the British Empire, dies and is replaced by Edward VIII.

Hashemite Arabia, Egypt, and Libya sign an alliance called the Axis against the Ottoman Empire.

Inspired by Syndicalist Franec across the border, the C.N.T.F.A.I Anarchists of Spain rise up against the king. A 3 way war quickly ensues between Democrats, Carlists, adn Anarchists.

Panama faces a famine after several crop failures due to low levels of rain.

Siam continues to advance in it's development and starts to become a Powerful Nation in SE Asia. Oil production in Occupied Burma is splitted between Japan and Siam due to Japanese assistance in crushing Burmese forces.

Canada faces many rebellious New Englanders and rebel forces stir up across the region hoping to break free and either rejoin the Federal Republic or make a sovereign state.

Canadian control over the Panama Canal is abolished after the bombardment from Siamese Destroyers.Canada and Siamese officials meet in Quebec and a treaty is signed. Siam request to negotiate with the Panamanian government to split the Canal's Control

Hashemite Arabia offers to trade Oil with any nation willing to make deals with them to increase economic prosperity and development.

A Pan Asian Uprising begins in the Dutch East Indies and the rebels request support by the Siamese Government.

Siam starts to support the Muslim minority across it's territory.

Venezuela falls into famine after poor soil and crop failures which were than followed by a drought. This starts to stir up a Civil War between Socialist and Far right rebels.

The Federal Republic are victorious against the CSA in the battle of Jacksonville and New Orleans where 103,000 troops died in both battles but the US works on stabilization and support New England Rebels against Canada leading to Canada losing control of New England.

Puerto Rico break free from the US

Panama: we travel to siam to sign the paper to split the canal we start to the bulid copper mines along with producing Bulldozers call Toros Model I, we raise the military budget by 10%, we offer the combined syndicates of america asylum if anything go wrong, with these we start up Panama Air, our First Airline for purchase 8 DC-3 for Panama to Brazi/Panama to Cubal/Civil flights,5 Boeing Model 2s for mailplane and 3 Short S.8 Calcutta for civil flights/Panama to cub, We Start to Build Panama International Airport Near Panama City, we also start to to build railroads around our nation which will use steam trains for passenger/light weight cargo and Diesel for Heavy loads we buy 2 Stream Trains Pasado and Estrella Roja De Panamá, we also buy 2 diesel trains Futuro and Rey Del Sur. we reformed much of buildings to look more like france we also reformed all our roads with crushed Slate. We Start to Offshore drill and inland drill for Oil, we start to make Tropical Fruit  Punch Soda called Tropipop which we start to sell in France,Brazil,Cuba,Siam,Japan,Houston/Moblie and at home.  For Defense of our land and our boats we ask the UK for 20 QF 2-pounder naval gun and 80 QF 13-pounder 9 cwts    (top secret) we start to build a armoured train called Bisonte furioso with help form cuba

Retrieved from "https://mapgame.fandom.com/wiki/Kaiserreich_(Map_Game)?oldid=74992"
Community content is available under CC-BY-SA unless otherwise noted.