It is Europe 2008. It is only years away from the beginning of the 2nd Great War. Tensions are on the rise in Europe with the Russians led by Vladimir Putin threatening their neighbors.  This is the world different from ours with most of the counties we know today on the verge of collapsing. It is up to you to change the fate of history and to lead your European nation to power!

I welcome you to the World of Long Live Europe! One of my first map games that I have worked on creating. As the introduction said, this game begins in 2008. In a European world much different from ours. Some nations might not seem familiar as remember different events had occurred in this world but will be explained briefly as Anne Frank survived the holocaust and later became Chancellor of Germany but also the USSR lasted for a much shorter period of time and collapsed in 1981 instead of in the early 90's.

Many people were happy and nations thrived in the modern and technological era. But than Dictator Vladamir Putin came to power in Russia and threatened the neighbors of Russia's freedom with the invasion of Eastern Estonia in 2006. This caused a bunch of chaos in Europe and in 2008 the economy crashed drastically in Europe. This is when problems begin to arise. In the Middle East, War rages between the small and yet powerful Israel against Egypt. The USA signs a bill to disband NATO as it becomes unsustainable  for reasons not mentioned. Many nation's names have also changed including territory control.

But most importantly, you can play as any nation you want in this timeline which will be listed in the near future.

There are several rules that must be followed:

Nation's populations only increase by 1% a year.

Naval forces are limited to only 0.009 percent of the population.

Outside countries are controlled by mods

Remember: In order to join the game you must place your name beside the nation you would like to play as in the nation's list and then create a page for your nation with population, flag, capital and etc.

( if you would like to play as another nation that is on the map but is not shown, add it here and put your name or username beside it.) 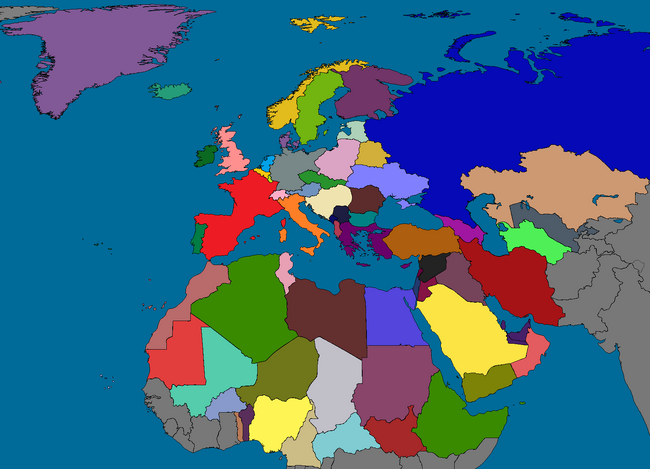 Begin your turn here, a year is one day. One update per year.

Iran works on the development of Nuclear Missiles.

Syria begins to have an Era of Prosperity in its nation.

Egypt and Israel are at a stalemate with their conflict.

Nationalist Movement's begin to take place in Catalonia and Basque.

Mason Sew is elected into office in Ireland.

After the economic crash Europe struggles to get their economy back up.

The Production of each military product on an annual basis will be shown below:

Also 18,000 people have been recruited into the military this year. Production of food and crops have increased significantly but tensions near the Libyan border are on the rise.

Libya commits a surprise attack at Tunis killing 28 from an Air-Raid on January 2nd, 2009 but the planes are attacked by Tunisian Fighter Jets which destroyed all the planes that deliberately attacked the capital. After this event, a declaration of war was made by the emperor and the Tunisian House of Representatives. The US has agreed to support the nation in its conflict.

In Russia, a famine has begun to take place and revolts have led to the deaths of 5000 which has caused the citizens across Russia to begin to hate their leader more for not doing a good job.

Many nations in Europe begin to work back to a steady economy.

Iran begins to work on the design of Nuclear Missiles which have been sanctioned by Neighbor's as the nation's current leader had threatened to attack their nation in the past and concerns have been growing in the civillian population over this.

The UAE works on its skyline especially in Dubai to grow its economy in business and tourism.

Retrieved from "https://mapgame.fandom.com/wiki/Long_Live_Europe!_(Map_Game)?oldid=79561"
Community content is available under CC-BY-SA unless otherwise noted.