Read the challenge made my the Moderator

The submitting is the period prior to the voting and the moments when you can post your turn in the contest, when the voting begins you will have a period to polish, fix or add your contest but after that is done you will be no longer able to change anything. This period and the submitting period will be discussed later.

Essentially this is a simple POD with great changes, What if Darius had conquered Greece, if the Greek's weren't able to assemble a fleet quick enough to counter the Persian fleets and had failed to defend their country. Imagine a world were the Greek culture was smothered by the Persian

Without greece's knowledge, lots of language in Europe won't develop and things are just like Asia.

Essentially its a challenge for you to make an entirely new world map out of thin air and make up your own Story on the regards of how that planet came to be politically, socially and culturally (among other aspects), the World may be on in different stages of its Historicaly evolution (That is it may be in an ancient, middle ages or Imperial age or Modern Era) the only requisits are Labelled maps and a Story spanning a minimum of a millenia

I saw no one submit, so I decided to make a map anyway. 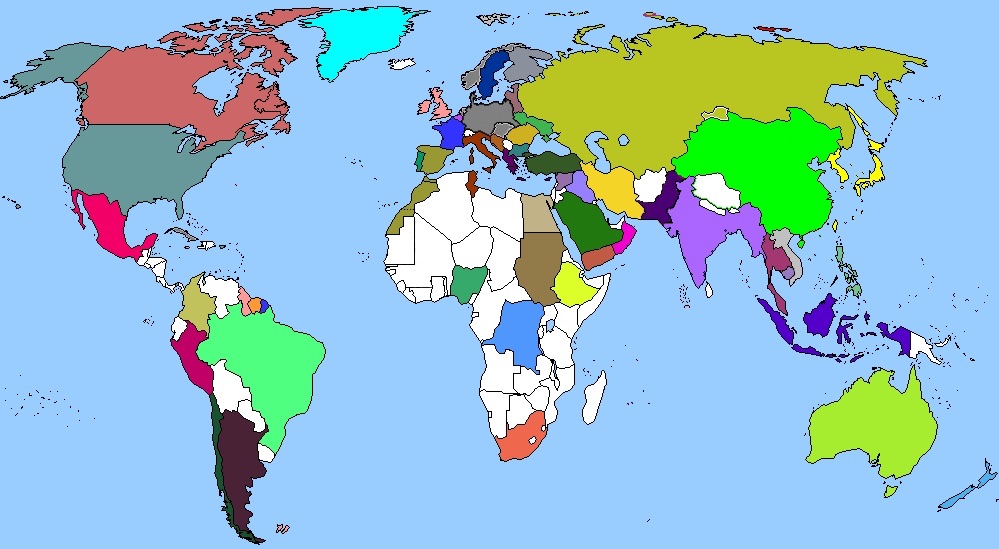 I don't know if it's allowed, but I made a map of only the Americas. Some description:

Basically, it's a more divided America. Russia colonized Alaska and went deeper into the continent, China was actually the first to colonize the continent, after it was discovered by their admiral Zheng He. It took them a while, but eventually they established a colony in OTL Washington, which expanded for a while. The also colonized the Galapagos and El Salvador. Spain was still the big shot of America, although they hold less than OTL. Now, three of the nations are a little obscure maybe, but I will explain. The Tupi were Brazilian natives, and they are marked as a nation because they were more advanced than the rest of the natives, mainly by stealing Portuguese and Spanish weapons. The United Plains Confederation is a confederation of the natives in the plains region(Lakota, Shoshone, etc). The different tribes have their own territory, which they control, and the chiefs of those tribes all get together a few times per year to discuss their moves. As for Israel, it is the most weird one there. Basically, a group of Jews fled Asia in fear of being killed, and while traveling they stopped in Morocco, where they rested, and then continued looking for a new home. It took a long time and many died but they eventually managed to find OTL Puerto Rico, which they named Israel. When the Europeans came to America, they thought to encounter savages, but found a relatively civilized people, the Israelis. The Israelis welcomed them, but when Spain tried to conquer the island the Israelis successfully defended. Meanwhile, the Ottomans also colonized. New Istanbul and New Izmir. When the Vikings colonized North America, they got kicked out in OTL. In ATL, some of the Helluland settlers survived, but remained unknown for 200 years. After that, they sent a fleet eastwards, with the hope of finding Scandinavia again. What they found was Greenland, where there were no Europeans. Part of the people in the fleet thought that this actually was Scandinavia, but that it had frozen completely. But the leaders of the expedition, Lars Leifson and Thorvald Kolbeinnson, did not believe that and ordered the expedition to continue towards the east. However, about 25% of the men did not want to continue, and were convinced that they would never find Scandinavia. It cut down the fleet in size, but the fleet continued and they reached the shores of Norway. The Danes and Norwegians were amazed that they survived. Although originally, the Danes intented to evacuate Helluland, the Hellulanders convinced them to not abandon the colony, but to continue colonization. This is how Greater Helluland came to be.

So Russia conquers parts of China,Japan,and all of Sweden!

The Byzantines conquered Egypt,North Africa,Persia,France,Norway,Denmark,Germany,and parts of other Asian nations!

Ethiopia annexed much of Northern Africa,parts of Arabia,and a small bit of Persia.

India,Southeast Asia,Oceania, and most of China merged to form the Indian Empire.

Somalia covers the rest of Northern Africa after overthrowing the Kingdom of Punt.


Retrieved from "https://mapgame.fandom.com/wiki/Map_Contest?oldid=75014"
Community content is available under CC-BY-SA unless otherwise noted.