The country has a president as head of state, but actual power is in the hands of a prime minister, who is also at the same the chairman of the party's Central Council, which is the chief decision-maker of state affairs.

It is also divided to eight provinces. 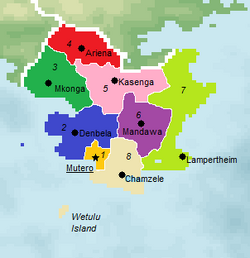 Retrieved from "https://mapgame.fandom.com/wiki/People%27s_Republic_of_Mabuda_(New_World_Map_Game)?oldid=56931"
Community content is available under CC-BY-SA unless otherwise noted.