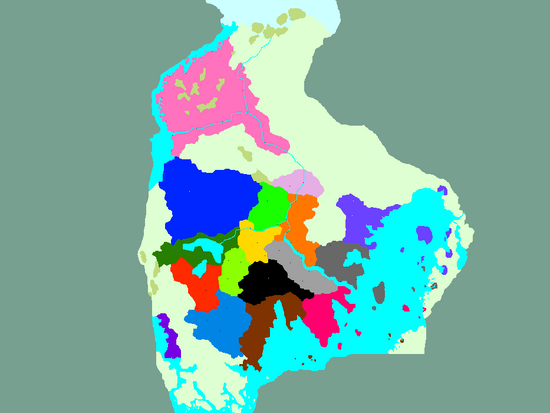 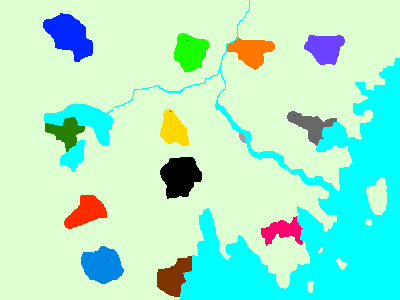 The Pink nation expands to the coast and founds a city there. Explorers begin sailing on the nearby sea, discovering that the ocean expands far to the east.

The Green nation begins sailing across the Great Lakes, founding settlements all along the coast.

The migrating Gray separatists from the High Chiefdom of Grey found a republic on the opposite side of the river, centered around the city of Platinumsburg.

All nations expand in their surrounding area. 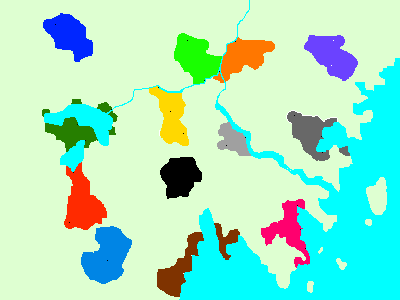 The settlement of Princeton on the southern bank of the two rivers leads to some sporadic, although accidental, clashes with settlers from the Republic of Green. 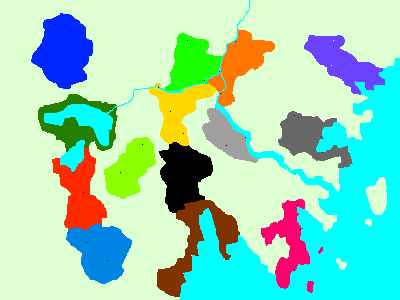 Native Greenmen from the south of the Republic of Green, who traditionally lived along the banks of the lower Great Lake, become angered by the attempted treaties, which they see as the Republic not representing them fairly. A large continent of settlers migrate to the southeast, where they found a rival republic, known as the Republic of Mintland. The nation becomes a mix of Green and Yellow cultures.

The Blue tribes of the northwest are united under a charismatic chieftain, who begins rapidly expanding and raiding south, reaching the Republic of Green from the north.

Minor border clashes erupt along the border between the Green, Orange, and Yellow nations, and occasionally Gray explorers. 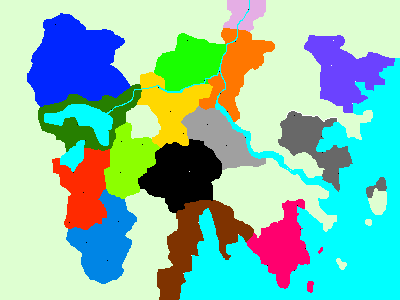 The Confederation of Folly migrates from the north, settling a city on the Orange nation's northern border. The nation claims to be fleeing south from an even greater threat further north, and asks for peaceful relations and aid.

The Black nation abandons tribalism in favor of a more feudal society, founding its first city in the center of its territory, and expanding less rapidly.

The Chieftains of the Blue nation begin heavily raiding and pillaging sections of the northern Republic of Green.

The Republic of Mintland, although hoping to play both sides of a potential conflict, remains neutral toward both the Red and Green nations. 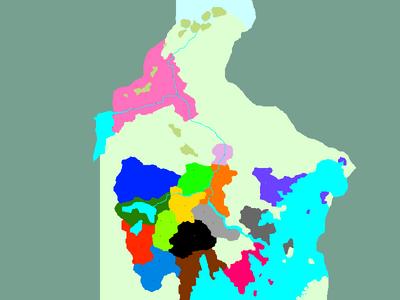 The Republic of Folly agrees to trade information and maps with the Orange nation, expanding the view of the surrounding area.

The Blue Chieftains begin to expand in different directions, with one chief successfully capturing a city in the northwest, another moving east toward the Light Green, and the main continent raiding all along the northern sections of the Republic of Green.

The Purple nation begins settling colonies across the sea, while also exploring the land to the east by sea.

Brown explorers navigate around what they believe is the southern tip of the continent.

Frontiersmen from the Republic of Mintland and an army of foreign soldiers and volunteers push into Yellow territory, although do not yet win a decisive victory against a major Yellow army, nor do they seize any cities.

The Republic of Light Green attempts to lay siege to the city of Aurum and the strategic river crossing.

The Kingdom of the Northern Pinks continues to expand along the river south.

The Yellow Kingdom wins a decisive battle along the River Vert in Green territory, however, is unable to press the offensive as it dedicates men toward the successful relief of the Siege of Aurum, as well as toward repulsing Mintlander attacks into its territory. In the east the Orange occupy the region directly west of the river within Light Green territory. 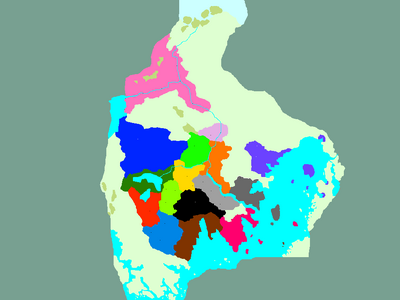 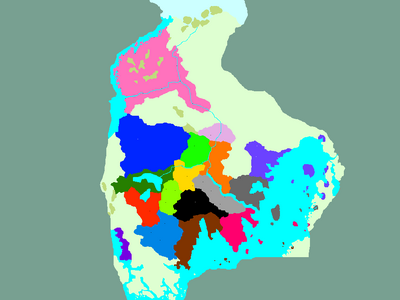 Information about the northwest coast trickles south through Blue territory after their expansion in the area a few years prior.

Red and Blue settlers intermix with natives in the southwest, forming the Purple nation along the coast.

The Second Yellow Invasion into the Republic of Green is a success, with territory along the River Vert being occupied. The Orange Kingdom is similarly successful against the Light Green.

In the southern front of the war, the Red invasion is halted by the Republic of Green, and a stale mate ensues along the border. With a similar stalemate ensuing in the Republic of Mintland, the Mintlanders shift their focus to repulsing the Reddish invasion.

The government in Cinereousborg, the northern-most city within the Gray Republics, proposes the creation of an international organization to promote trade and cooperation.

Retrieved from "https://mapgame.fandom.com/wiki/Principia_Coloris_(Map_Game)?oldid=79636"
Community content is available under CC-BY-SA unless otherwise noted.