The Year is 1991 in a timeline muich different than ours. The USSR has collapsed,leaving the People's Republic of China, The Brazilain Federation  and The European Comittee as the dominant world powers. The Red Star alliance is in shambles without the key player in the alliance. The Chinese led Shanghai Cooperation orginization has failed to establish a sphere of influence in the Former United States. The Brazilian Federation is quickly going the same way as the USSR, creating instablity in the Strategic defense coaliton. The European Comittee suffers from infighting, which threatens the future of the orginization.

Choose your nation, and lead it to glory in this Brave New World.

The first POD comes at the American Civil War. The US fails to stop the Confederates from achieving international recognition, and as a result, the US loses the Civil War. From there the US and CS become rivals, competing for influence in North America. The two come into conflict several times, with the conflicts always being ended by the timely intervention of the UK and France. When Europe divides itself into two sides, the US and CS find themselves on oppisite alliances, foaming at the mouth for war. World War 1 happens, with the US aiding the central powers and the CS fighting with the Allies. Eventually, in 1922, World War One ends in an Allied Victory. The Us is divided into 4 seperate nations, The Confederation of New England based in Boston, The United States based in Colombus, The Allied States based in Albany, and the Western States based in San Fransisco. There was a breif period of peace, but, in 1936, a radical took power in The United States. By 1942, the US was reunited. Similarly, the CSA found it self ideologcally closer to Hitler than to The Allies. When war broke out in 1945, the CSA and the New USA found themselves on the same side of the fight. They breifly merged to form the Union of America, and joined Japan, Germany, and Italy in the Second World War. But yet again, the Allies won. In 1962, the Soviets took Berlin, and proclaimed a new People's Republic of Germany. Disagreements post war established the foundations for the cold war. Brazil, which was now the largest power in the Americas, took the chance to expand her influence and established her own sphere.

From 1964-1991, the cold war divided the world. China's civl war ended in a communist victory, and as more and more colonial rebellions took place, the Red Star Alliance rapidly expanded her influence. However, a politcal drift between the USSR and China in 1980 ruptured the alliance. China broke away and established her own Sphere under the Shanghai co-operation orgnization. In response to the RSA, the Free nations of Europe formed the European Comittee in 1949.

The USSR would meet its end in 1991. Caused by many factors (Including the Hungarian Revolts in 1981, 1982, 1984, 1987, and 1989), the USSR simply could not survive any longer. On Christmas of 1991, a coup was staged by Vladmir Putin and Boris Yeltsin. The coup spairled out of control, and the Communist superpower ceased to exist. 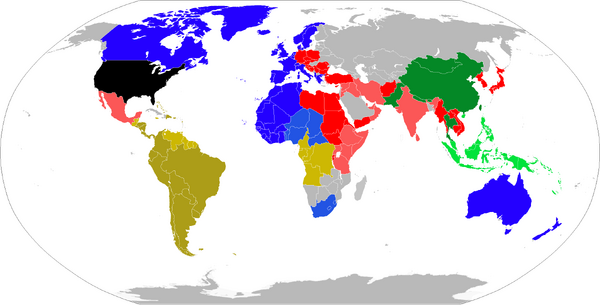 Map of Politcial Spheres within the US 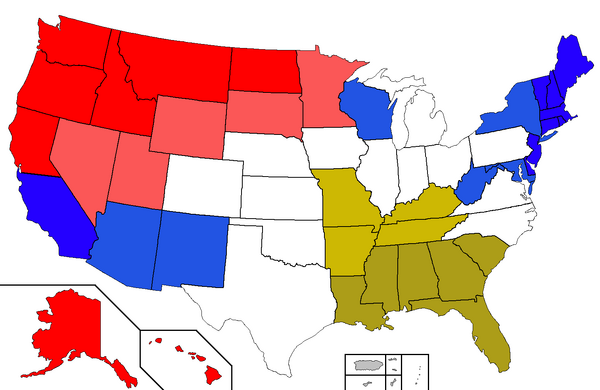 On the talk page, under the algo, will have maximum manpower per state at turn 1. Adhere to that

Note: You can not flat out take over countries, you can establish puppet governments although that will generate backlash.

Retrieved from "https://mapgame.fandom.com/wiki/Shattered_Stars_and_Stripes:_Brave_New_World_(Map_Game)?oldid=59633"
Community content is available under CC-BY-SA unless otherwise noted.