During the elementary years children learn values of respect, love, and working together as well as having a general education (grades 1-6). During Junior High (grades-7-9) students explore what kind of profession they would like to pursue with a strong influence on science and technology. In High School (grades 10-12) students take specialized courses in order to pursue the career they wish to do. For higher professions such as a medical doctor or a lawyer  higher education is required.

Mars has an above-average set of doctors on a world scale, but thanks to increases of higher education, they are clearly the best in Solar System. In 2110 the legislature passed its first bills concerning health care improvement. This bill incited a base fee to pay for emergency services, including funding fire, police and emergency paramedics and free ER services. An additional amendment was passed that gave people the option to opt into the government health care plan. This required payment of another base fee and a tax based on a household's income and capital gains. This health care plan is considered average by national standards, but is common for government employees and many midsized businesses.

Under Primier Barzhenev, Martian politics have been made more democratic and akin to Lenin's designs; a democratic-socialist form of Communism is the dominant ideology. Citizens over the age of 18 freely engage in elections, choosing the Chairman of the Supreme Soviet every 5 years, although the one-party system is still in place.

Citizens have the right to freely gather, the freedom of speech and press, but the KGB still has the right to invade people's privacy so it could gain information on dissidents and the agency's influence on everyday life is quite strong. The propaganda machine is as active as ever, trying to legitimize this invasion of privacy by stating that the government has done wonders in keeping it's citizens safe, which is more than true in the post-nuclear age. The larger cities are crowded and officials give incentives for people to move to smaller cities and villages.

There is no law regulating the amount of children a family can have and abortion is legal. Same sex marriages, however, are not. Through reforms, faith has also been established as a personal choice and it is not frowned upon.

Although the government is largely modeled by the 1977 Soviet Constitution, civil liberites are surprisingly modeled on the UN and Soviet ways of freedom and democracy, since it is modeled after the UN Declaration of Human Rights and the 1977 constitution. It highly bans any party that is believed to threaten the safety and security of the Republic. The society in some regions enjoy a relatively high quality of life and most disease around those regions has been eradicated. They often enjoy better standard of living, long term investment and tend to use robotics for menial labor.

The government is a truly democratic Socialist republic. The people elect representatives to the legislature, which performs most of the duties of government. The President, also elected by the people, is mostly a figurehead.

The structure of the executive body is largely modeled on the 1977 constituion of the Soviet Union. It calls for a presidium, headed by a prime minister, who wields much of the executive authority. Although there is a post of President, it is largely a ceremonial one.

The National Assembly consists of 500 members, selected by poular vote. They elect the Prime Minister form themselves.

The Red Planet is divided to eighteen constituent republics, each occupied by a certain nationality. 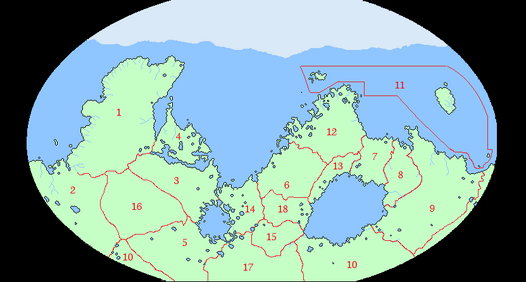 The armed forces, known as the Martian People's Liberation Army, consists of approximately 743,000 troops equipped mostly with equipment captured form the UHN. Its fleet consists of 20 battleships, the well known ones were named as the MPLAS Taymelav and MPLAS Gorky. A more powerful ship, the MPLAS Stalin (named for Soviet dictator Joseph Stalin), is in the works.

The first setllements were established as a result of a competition between major powers, with more nations joining in the scramble. The settlements then grew large enough that the planet was segmented among the nations partcipating in the scramble; these zones beacame the forerunners of the constituent republics.

The 2057 war and its aftermathEdit

Like on Earth, the 2057 war had a drastic effect on the planet. Russian troops conquered much of the colonial zones, but the UK still holds on to to the remnants. After the war, the planet was re-estabilsed as a dominion of the recently formed UHN (United Human Nations).

Independence and the rise of the Communist regimeEdit

Retrieved from "https://mapgame.fandom.com/wiki/Socialist_Republic_of_Mars_(Solar_Wars_Map_Game)?oldid=19690"
Community content is available under CC-BY-SA unless otherwise noted.