There is no Byzantine Empire. No Earthly nations exist within this game, as this is an entirely different planet. Did you read the premise of the game?
Oh.

Where in Sebastiana is the Union of Sovereign Kingdoms located? It has no colour. - QC

Hello, QC, welcome to New World! The Union of Sovereign Kingdoms is the nation located to the east of Washington Bay. If you wish to register, I will notify you when the game begins on the 30th June. Also, please create a user account before you register, as it is required for you to be signed into Wikia to be able to play in our map games. Thank you! —The Tim Man (IH • GC • TSW • AH • Contribs) 18:06, June 9, 2015 (UTC)

Well, I had a account named QuebecanCanada (That's why I sign my posts QC) put i accidentially deleted it, so I became an Anon, but I will try to make a new Wikia account. - QC

So, I have a few comments here:

How would I register so I can play? Second, where would the kingdom of liberty be, and can I play as them? Sorry wasn't logged in. -Popy234

While the game is being run fine for now, you are taking away some freedoms from the players by deciding when they sue for peace and when/if they declare war. It would be better to allow people to make those decisions themselves, because I personally wouldnt like to be pulled into some war because the head mod decides so.

Since school is coming in a few days' time, my mother would restrict me from using the computer. so i need anyone to substitute me or put my nation under mod control while i am away for school. I wont quit from this game, just no time to give attention to it.

Resignation (for now, at least)[edit source]

I wish to resign from the game for now due to boredom. I may return in the future.

Does anyone have a copy of the map like the one below, but no labels? It would useful for drawing administrative borders, rivers, cities, etc. 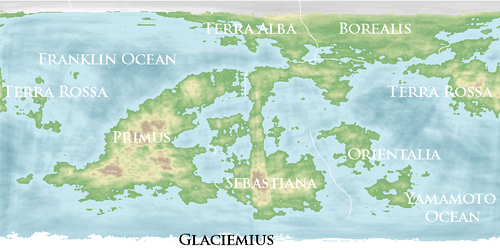 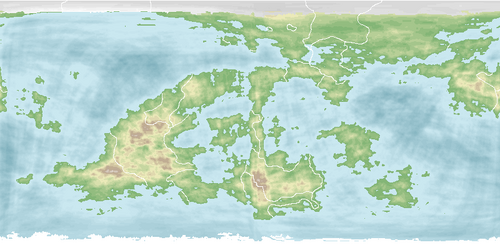 An update to the map after the Liberation War.

Question: Could I Join?[edit source]

Hello, I know the game has started, but I'm quite new at this wiki. So, can I join the game or wait/sign up for another?