The Fight for the Americas is a map game where the year is 1492 and Spain has fallen. In 1495, the Americas were discovered, yet exploration and colonization did not begin until 1500. Now the year is 1500, and now, you have the chance to change the course of history. Would you make your nation have a colonial empire that the sun never sits on, or would you expand the homeland and conquer your neighbors?

1469: Ferdinand II of Aragon and Isabella I of Castile marry. They state that once they free Iberia of Muslim rule that they will proclaim the Kingdom of Spain, uniting both Aragon and Castile under one government.

1478: Ferdinand II is discovering having an affair with a noblewoman by Isabella I. Ferdinand said he had an affair because he thought that by now they would of conquer Granada, allowing the creation of the Kingdom of Spain, the only reason why he wanted to marry Isabella I. He buys an indulgences from the Church to keep him from being a "Sinner". Isabella asks for permission from the pope for a divorce. The pope agrees and Isabella and Ferdinand are now rivals.

1482: Aragon proposes to Portugal an alliance and to carve up Castile between them. Portugal agrees and both countries invade Castile, along with war subsides from France. The reason why France gave subsides to Aragon was because France gave subsides in exchange for a fifteen year non-aggression pact and France being worried about Castile trying to invade France.

1488: The city of Madrid surrenders after a three year long siege.

1495: A Portuguese explorer goes out looking for a new trade route to China, Japan, India and the East Indies. He discovers a small island (OTL Antigua) and names it Illhadoparaíso, which is Portuguese for Island of Paradise. The discovery remains unimportant due to the Portuguese government and the Aragonese government focusing on rebuilding Iberia. However, Portugal keeps the discovery as a secret.

1500: The secret of the Americas is leaked and many countries in Western Europe are now preparing their ships to explorer and colonize the Americas. 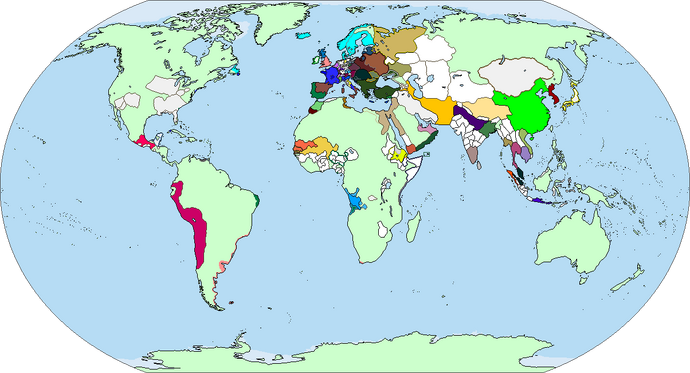 Expected number of mixed babies to be born: 50

Retrieved from "https://mapgame.fandom.com/wiki/The_Fight_for_the_Americas_(Map_Game)?oldid=73039"
Community content is available under CC-BY-SA unless otherwise noted.