The war is in its 8th year since it started in 1959 according to Minitru. The Real War is a continuation of WWII. When the Soviets conquered Europe after betraying the Germans in 1943, the Allies were forced to unite after Churchill and a military junta in the US lead by General Patton formed Oceania. Japan, a neutral country had carved its way through Eastern Asia and formed a third super state. In 1959 it started the Perpetual war by attacking Oceania and Eurasia. It had also conscripted the countries of India, the Caliphate, and Free France to work with it. In the year 1967, the war rages as the 3 of the last nations are on their last breaths but 3 others continue fighting. 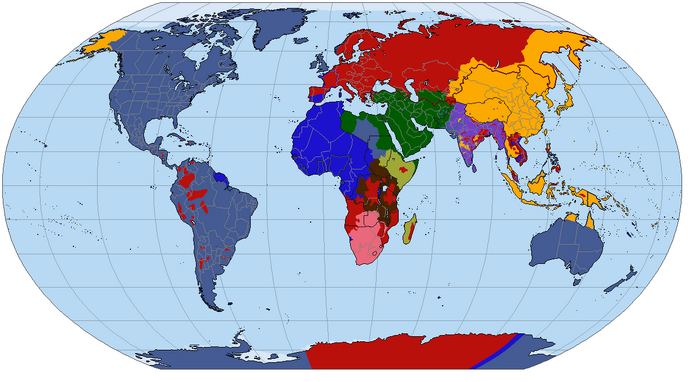 Oceania and Eurasia enter an alliance against Eastasia. Oceanian troops have a hard time holding their own against Free France and all the communist Rebels against its fascist rule. Eurasia meanwhile begins a purge of Muslim within its borders. There is a cease fire in part of Oceanian controlled Norway. Eastasian troops lose several battle's in Australia and Alaska. Oceania captures old Delhi from India. Eastasian troops are slowed in Central Asia and Siberia. Rocket bombs pummel China and Tibet. Oceanian floating fortresses bombard several coastal Eastasian cities.

Retrieved from "https://mapgame.fandom.com/wiki/The_Tri-State_world?oldid=73372"
Community content is available under CC-BY-SA unless otherwise noted.