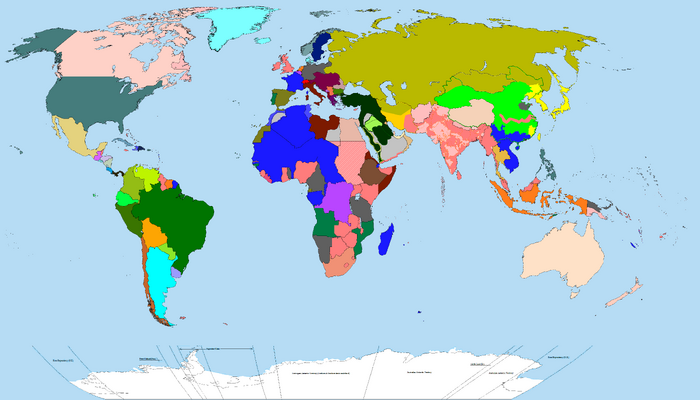 The year is 1914; Austria-Hungary's emperor Franz Ferdinand has been assassinated. The European continent is now at war, all just starting from a war between Serbia and Austria-Hungary. Pick a nation and lead it to glory!

You can apply to become a mod by posting your application on the talk page of Claus the Mighty- the map game's founder.

Mods can't puppet small NPC nations to fight for them.

The Great War rages on.

Note: Make sure to defend and tell how many troops you're attacking or defending with. Also take advantage of artillery, tanks, cavalry, planes, and ships. (see algo)

Also...please try to be more plausible. The first turn was somewhat of a mess and nearly everyone' moves ended up stirring tons of controversy. --Claus the Mighty (talk) 23:42, August 9, 2015 (UTC)

Canada: Invades Alaska from Juneau to Rampart with 100 000 troops and two armored cruisers, secures the area with 80 000, 1 cruiser and three destroyers. Parliament passes the Equal Rights act, giving females over 21 the right to vote and forcing female conscription. Canada also invades St. Pierre et Miquelon with 5 destroyers and secures the area with just as much. Canada then requests a trade agreement with China, and begins attacking US trade and medical boats from the Pacific. Talks are held with the UK about buying Bermuda, Jamaica and Newfoundland. --Fireurchin: Destroyer of worlds Topkek m8

Germany: SORRY FOR NOT DOING LAST TURN. We offer the Treaty of Minsk with Russia. Its basically that Russia seizes the land they've already gained from us and we have to pay war reparations. Russia can not attack Germany for a hundred years and the same otherwise. Russia would have to declare nuetrility in WW1. We send aid to America and any other Central Power. We continue in are invasion of Belgium and threaten to invade France if they invade Belgium. This means all fighting in Europe will cease that involves Germany. We put more fortifications on are African Territories. We invade New Zealand and say that Australia is useless to the Greater race of Germany. We invade British India with a massive army. We build are army with more volunteers with us winning the war. We build are military.

Italy: We remain neutral, but raise military to 750K to defend and send materials to Germany, and Austria-Hungary. We work on 10 tanks after it's invention. They will be finished in 6 months. The unemployed who want benefits are forced to work for them, and we rely on charities to provide the resources. Communists are popular as in OTL. Mussolini creates the Fascist party, and immediately it becomes popular. We also expand in to Unclaimed Libya further.

Russia: Riots occur in western Russia as ethnic Poles seize an opportunity for independence due to the war. Protests begin after Germany's offer with the Treaty of Minsk, hoping an alliance with the Central Powers would aid their independence movement.

France: We help our fellow Central Powers. We urge Germany to keep fighting and ask Italy to join the war. A draft occurs of 100,000 troops. We research tanks. We build 5 dreadnoughts. Our military now stands at 4,141,000 men, 3,200 artillery, 10,000 cavalry, 4 dreadnoughts, 10 cruisers, and 2 battleships. We send 10,000 troops to all German African colonies except Togo to help them defend against British forces. We continue our attack on British Sudan with 200,000 troops. We reinforce the Germans in Prussia with 300,000 troops sent to defend. We will aid any German attack on Russia. We send 1 dreadnought, 4 cruisers, and 100,000 troops to the USA to help them fight against Canada. We attack British Burma with 10,000 troops and 200 artillery. We send 100,000 troops to defend Austria. We improve economy and trade and send military equipment to our allies.

sorry I made your army smaller but now it's more plausible and it is still a big army. Also aircraft carriers don't exist yet and battleships take a long time to build. -Rev9

Also, I'm not the one who keeps editing your turns.

French Dip: We will decide what happens with Belgium after the war is over.

Imperial Federation: We reform the British Empire into the Imperial Federation. We ask the Republic of China for help in the war, in exchange, we will return Hong Kong to them and give them support should they invade Central colonies in South East Asia. We ask Spain to invade France, and in return offer them joint control over Gibraltar. The same offer is sent to Japan, but we will give them Sabah and Brunei instead and support them should they invade American Philippines, the Dutch East Indies, or German New Guinea. An additional 300,000 troops are sent into Canada to assist them against the bellicose United States, with 13 dreadnoughts and 25 battleships bombarding the East Coast. We send spies to assassinate the French President. We offer Mexico the British Honduras in exchange for an attack on the South and Southeastern United States. We also offer to give Yemen and Oman to the Ottoman Empire in exchange for their assistance in the war. (RNG/Mod Response please)

Retrieved from "https://mapgame.fandom.com/wiki/The_World_at_War?oldid=79684"
Community content is available under CC-BY-SA unless otherwise noted.