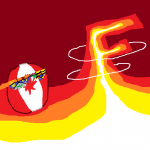 aka Destroyer of Wikis

Hi, welcome to Map Game Wiki! Thanks for your edit to the Thread:7304#3|I am hosting a Lord of the Rings Map Game and encourage all to play page.

Please leave a message on my talk page if I can help with anything! SwagMaster420 (talk) 22:27, June

The game has begun!

well, i can't just trust any random person to become a mod; post an application on my talk page and ill decide

Don't worry.  He can't take it in one turn.  He can try but he won't.  Also, just modify your turn to get more defenders and stuff.

Seeing as you're probably the game's creator/ a mod, could you please monitor the plausibility of the actions taken by almost every single player? To start off, France and it's citizens hated Germany. Their leader declaring war on me (the Brits) would absolutely throw the country into chaos. The French wanted Alsace-Lorraine back, not to get England back, and any action seen as favorable to Germany will be seen as an act of treason against France by it's people, especially if it was their own president. The U.S invasion of Canada is probably plausible, but not to that extent. Millions of conscripted soldiers attacking a country/empire/state they started to grow close with, with no appropriate reason whatsoever should definitely anger the American populace. I mean, you randomly invade a country with 2 million soldiers WITHOUT A CAUSE. I never "Pearl Harbor'ed" America, and mod events should DEFINITELY state the undoubtable unrest in France and America. Another things is the German invasion of my Indian and Oceanian countries. You don't need an algo for that, just common sense. Germany could not, in no way whatsover, be able to send millions of troops across Russia or Middle East to invade India IN A FEW MONTHS. Any German invasion attempts of Australia from New Guinea, well, he could try that if he wants. You saw the first turn of the game, and the second turn was basically the same. the only thing I ask of you and the mods is  to keep the game plausible, and downright retcon any ridiculous events. Erizium (talk)

The Egyptians have kinked the British officials and community out of Sudan in 1914, then ended the the co-dominion. I am happy with this and Turkey (my nation) has supported this.

I would expect the useless British to try to punish Egypt for this action. Probably not not much, but it would be done so as to put off other potential rebels in the Asian colonies. I think the British would try to secure the Suez Canal, especially as he has not kicked out the all-be-it small British garrison in Egypt. Egypt was a British vassal until they OTL rebelled in 1922.[[User:Christina Pill|Christina Pill (talk) 19:30, January 11, 2016 (UTC)]]

Panama offered a trade deal to Portugal and Costa Rica on trade in general. They are still pro-USA by their claims. Did the deals go ahead?Christina Pill (talk) 19:32, January 11, 2016 (UTC)

Retrieved from "https://mapgame.fandom.com/wiki/User_talk:Fireurchin?oldid=59477"
Community content is available under CC-BY-SA unless otherwise noted.