ATTENTION. This Game is being reset. That is all.

This map game is all new. This is a world at war. The human race here will face the most brutal war in history. The world is slipping towards annihilation in this war. Now the players in this map game will fight the last human war. Will humanity be united or will it become extinct? The fate of the world is in your hands.

Here are the nations in the war. Feel free to put the name of your selected nation/faction and add your signature on it.

Here are all the players that are banned from the game: 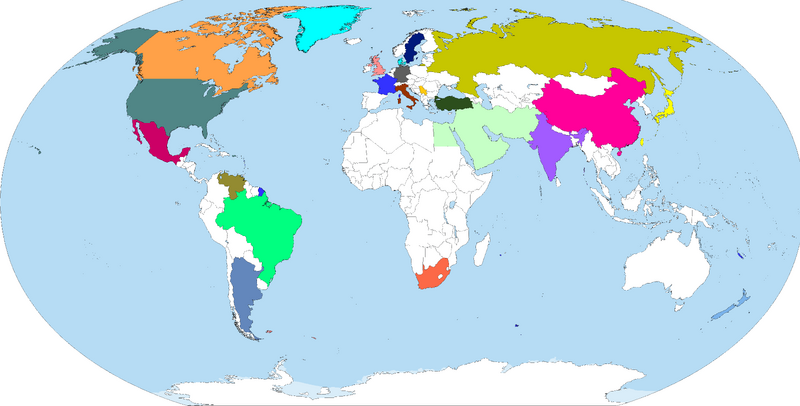 South American Union: We fully Annex the remaining South American Nations following our Agreement and put down any Dissenters to the annexations. Troops in Africa once again Stonewall the South Africans at any expansion attempt. A 5th and 6th carrier are added to the fleet as are hosts of new warships while old warships are sold to developing navies or scapped. The Ghost Program is deemed marginally successfuly as the augmentations highly deform or kill many members however about 25% of the Recruits from the program are able to move on and be successful soldiers and are outfitted in the Latest Military equipment sparing no expense for their success. The Oil industry continues to boom as many civilian technologies planetwide require oil to Run still. A manned mission to the moon is carried out however inherent problems plauge the voyage.. the man however does manage to make it land and return to the earth in regular order despite the issues. The Ship planned to be traveling to mars is Named the Dom Pedro After Brazils former Emperor. The SAU's population now numbers 398 million. This is more than the Russian Federation and United States. SAU combat aircraft seal off the continents airspace from any and all other nations military aircraft preventing any intervention or movement of enemy planes in South American Airspace. The military is officially cut off at 1.5 million troops with another 2 million in reserve. 200,000 troops are now in Africa stopping all South African expansion. VTOLS are continually developed and a new model is brought about and successfully out performs the US's V-22 osprey as well as many other Transport Helicopters. The Hawkeye VTOL is equipped with hardpoints for missiles, an attack helicopters cannon on the nose, and mountable rockets pods as well as side mounted miniguns. The Equipment is all optional all of the time and is not permanent in any point. The SAU sends more communication sattelites in orbit as well as a replaceable sattelite purely meant for clearing space junk from orbit with little launchable pods that will force the space junk/debris into the atmostphere. The SAU Begins Sending Rovers to the moon as well.

North America: Following the Full forced disarmament of many nuclear silos an intuative Defense Contractor known as Clawhammer successfully establishes a New OS overriding the older Nuclear Systems the US has in place, the entirety of the former Nuclear operating system is overidden by ClawHammers new software and the System is rebooted giving the US full control of its Strategic nuclear arsenal. The Tactical Arsenal shield developed as the temporary replacement for the strategic arsenal is phased out. The US Hunter Program fails as the chemicles and augmentation solutions kill near 95% of all candidates and leave the another 3 percent either badly disfigured or completely comatose. The Remaining 2% is able to return to active duty as normal US military forces

Retrieved from "https://mapgame.fandom.com/wiki/World_War_III:_Black_Gold_Map_Game?oldid=79389"
Community content is available under CC-BY-SA unless otherwise noted.